So here it is Monday already!  All the puppies are doing great.  They have pretty much doubled they birth weight.  Here are the weights as of yesterday:

They no longer will be weight on a daily basis.  It is obvious they are doing well and gaining weight like they should be.  I will still weigh them from time to time but it won't be long before they are too big for the scale!  By that time you definitely know all is well.

They're eyes and ears are still closed but they will start top open any time know.  It is a slow process over a few days to allow them to get accustomized to their new world.  I have classical music playing very softly in the background.  I good way to be introduced to their world I think.

They have started taking they're first wobblie steps.  Below is a video taken today.  The growl you hear from Indy at the end is because I didn't close the baby gate properly behind me and Diesel was starting to stick his head in.  Needless to say, he ducked back out quickly!  Enjoy!

Well I've just spent the last 1 1/2 hours trying to upload a short video for you but I'm not having any luck.  I gave up trying to put it on the blog and thought I'd be smart and just put it on my You Tube channel.  Turns out I'm not that smart.  That didn't work either.  I haven't given up but I have to take a break for now.

There's actually two videos.  The first one is recording how I weigh the puppies everyday.  The second video had to be taken because the first one made it look too easy! 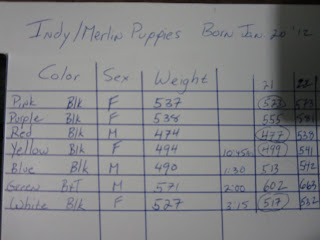 So there you are.  Something to look forward to.

In the meantime, here's the weights of the puppies.  The first column is birth weight.  Each column is the succeeding day.  The circled weights are ones that I wanted to watch to make sure they were going to increase at a better rate.  And they did.  No need to supplement.

Apparently I have a cut horse, so off I go.  TTYL
Posted by Mary Ann at 19:54 No comments:

So I'm not sure what's happening with this blog but there's definitely something missing!  At 14:32 yesterday I posted:

We have puppies!  Indy has had her pups!  There are 6 beautiful, healthy puppies.  3 male, 3 female.  There are 5 all black and 1 black & tan.  It's been awhile since the sixth pup has arrived so I think we're finished.  Although they can sometimes fool you!

At around 18:30 I posted that she had another female puppy.  Strange things going on here!

I'm just about to clean (again) and weigh the pups.  That will tell me if they've been getting enough to eat.  I'll post later and let you know how they are all doing.

There are two short (10 second) videos posted to my channel on You Tube.  In the search box type in Guardian Angel Shepherds or k9trainergsd.  Please subscribe so you'll know when the next video gets posted.  And don't forget to subscribe to this blog so you won't miss a thing!

We have more puppies!

Indy surprised us with one more puppy! A beautiful all black female. I'm very happy to say that all were born healthy & strong. Now the fun (and work) begins! Yippee! Thanks to all those who sent well wishes. It always amazes me how many people are fans of Guardian Angel Shepherds. We are most grateful for your support.
Posted by Mary Ann at 14:34 7 comments:

A quick note before I head off to bed. Indy is driving me crazy! She's constantly whining because she wants to go outside. Normally that would be fine but she wants to dig a den! They never believe that our human made nest is better than theirs. I've tried to make one for her but she doesn't like it. I think it's wonderful! I was going to put a picture of it but it won't let me from my IPhone. I'll get it up tomorrow.
Posted by Mary Ann at 00:33 No comments:

Ive had several people write and ask about the picture I use for my blog. This is Cruise. She is a sable German Shepherd from Czech descent. She was 10 months old when I took this shot. We were out for a walk in the back 40 and the sun was just starting to set. She blended into the tree so well & those eyes stood out and reflected the setting sun. I thought it looked pretty cool. Some are saying it looks creepy. I say cool! What do you say?
Posted by Mary Ann at 23:55 1 comment:

Indy's puppies have dropped!  That means we're only days away from having puppies!  Could be three days, could be ten!  So far so good.  I'm estimating around 6 puppies.  I've seen her bigger but she's looking pretty pudgy.  I'm sure she'll be glad to "lighten the load".  I'm using a ramp for her to get in and out of the Jeep now.  She always runs to the back and puts her front feet up, then says, "Oh ya, the ramp."

She's getting pretty short tempered with the young pups.  She rolled Cheetah the other day.  Didn't hurt her but definitely made her point.  Course I don't really blame her.  They jump on her and bump into her and try to steal her toys, and even sometimes her food!  That won't be happening anytime soon again! 8-)

The countdown has begun!! 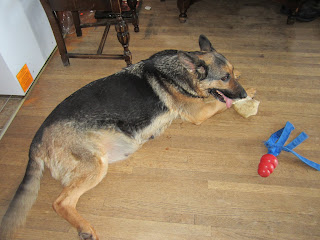 How horrified I was, when I received a phone call from a Humane Society stating that I had a dog there that was scheduled for euthanization!!  I asked who had surrendered him but they weren't allowed to say.  They did say they could tell me the dog's name though.  Goliath!  My beautiful gentle giant from my last litter in October 2010!  My daughter had asked me if her family could have him because he was so gentle.  I said if the next people who come would like to wait for the next litter, he's yours.  Needless to say, the next people "fell in love with him".  Ya, right!  I like dogs better than people.  The woman came several times to visit the litter waiting for them to reach 8 weeks old.  She had all the right answers. " We'll never leave him alone outside.  He'll be a family member.  We have a 6 foot fence.  Our last dog died at 14 years"... etc. etc.

I made the two hour drive to the humane society in an hour and a half.  No dog of mine is going to be euthanized!!  What I found brought tears to my eyes.  Literally.  Poor Goliath was in a kennel totally covered in garbage bags so he couldn't see out.  He was hiding under the bench, shaking and shivering.  When I asked him why he was scheduled to be killed, they said he growled at them when they came in.  Well ya!  Here's this big, beautiful, gentle puppy scared out of his wits!  He'd never been left alone before and, (get this) he'd never been socialized!!  He growled at me when I went in but I knew he was just scared.  I was willing to wait for him to adjust but one of the workers who had made a relationship with him walked right up to him and put my leash on him.

He was sure ready and willling to get the heck outa Dodge! That dog sure knows how to pull!  Up into the Jeep he jumped and he was quiet all the way home.

Once home, I put him in one of the temporary kennels.  It was then that I saw he had a misfigured left front leg.  What the heck happened to my beautiful puppy?  He was perfect and sound when he left here at 8 weeks.  I called the society wondering if the owners had told them what happened to him.  They said there was no info about it but they thought he may have been hit by a car and not taken to the vet.  Needless to say, I was/am just livid about all this!  Suing the owners for breech of contract comes to mind!!!!

After having Goliath for a few days, I've decided that the crooked leg was not caused by trauma.  I believe it was caused by malnutrition.  He is not in any pain at all, and he can run like the wind when you throw a ball.  It has to be a yellow tennis ball.  Any other type, he just looks at you like he doesn't know what to do.  I guess they couldn't afford a kong or other such fun articles!  (Boy, if you know what my blood pressure was doing right now!)

I've been racking my brain as to why I got so many emails saying he was such a wonderful dog, then when I return from holidays, I find out they've abandoned him.  But I think I've figured it out now.  They didn't train him one little bit!  Nothing!  Not a down, not a sit, not a "don't jump on me".  Goliath weighs about 110 pounds.  110 pounds have happy dog who just can't keep his paws off your shoulders.  Add this crazy, happy dog to a household who has added an infant into the mixture and there you have it.  A dog who is impossible to handle near a baby.  Or I should say "take for a walk" near a baby.  You'll see why I corrected myself at the end of my rant.

I was trying to figure out why they wouldn't just return him to me if they felt they couldn't keep him. Someone else figured it out for me.  They were too embarassed to bring him back because he was obviously neglected.  They went hours out of there way to drop him off at a humane society nowhere near where they lived.  It all makes sense now.  How pathetic and disgusting are these people.  I could tell you what I hope for them in the future but I won't digress.  I'm just happy the Humane Society read his microchip and contacted me.

So the story has a happy middle.  Not a happy ending because his story hasn't ended yet.  It will end when I truly find him a forever home.   Here is an opportunity to have a Guardian Angel Shepherd and do a good deed at the same time.  The only charge will be for the cost of getting him out of the humane society.

He is a beautiful, gentle soul.  My daughter described him as "being beyond his years".  As a young pup, he acted more like a 4 or 5 year old dog.  Lots of play and exciting times outside, but bring him in and he would lie in front of the fire while we watched tv.

Here is a picture I received from the owners 6 weeks before I rescued him. 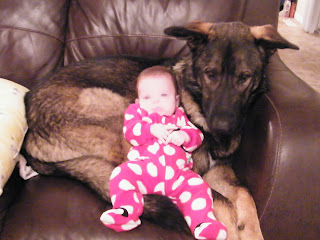 Definitely a dog that needs killing!  NOT!!  I took this picture to the Humane Society and they were appropriately appalled.  The baby's face has been blurred to protect the baby.

Below is a picture of my daughter with Goliath shortly before he went to his new home. 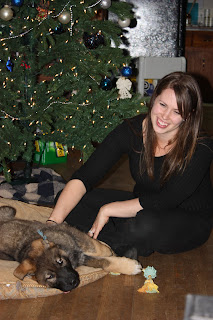 So please help me create a happy ending for Goliath.  Tell all the good-hearted, responsible, animal loving friends that you know.  Let's all get together and make this a Happy New Year for Goliath.
Posted by Mary Ann at 19:53 4 comments: